It seems like every day I have a war within me over whether to seek a higher road in our political and cultural discourse or yield to my basest self.

That lower self leapt out and roared when I scanned the news this morning. I felt like the lone figure in Edward Munch’s painting, “The Scream,” who is portrayed howling a scream at the pain of existence.

The first story I saw told of Sally Yates’ testimony Monday about Michael Flynn, his being compromised by Russia and her reporting the problem to the White House three different times.

The next story said three former Obama staffers asserted that in their meeting two days after the 2016 election, Obama warned Trump about hiring Flynn.

I gamely continued on, but the next story described Trump’s Monday tweetstorm attacking both Yates and the Russian investigation.

The next item noted that the focus of Republicans senators’ at the hearing was not Russian interference in the election or their compromise of a White House official, but the leaks that revealed them.

Oy vey! We need to give a medal to the leaker. That leak may be the only reason that the apparently compromised Flynn is no longer our National Security Advisor.

After that, I  had the misfortune of stumbling across another article telling how Jimmy Kimmel’s plea for children’s health care has become a partisan football.

Really? We don’t agree that the most vulnerable and innocent among us should have a right to adequate health care?

All this combined to make me think the nation is going into the crapper and I am going in it with everyone else.

Fortunately, a bit of grace appeared, even if though there is a sour note within it that points to what may be a well-nigh universal difficulty in tolerating opposing views.

As described in the AP story you will find here, a sixteen year-old Czech girl scout named Lucie Myslikova was among some 300 protesters who confronted a neo-Nazi group demonstrating in Brno, Czechoslovakia last week.

As shown in the photograph below, the young lady was in turn confronted and challenged by one of the neo-Nazis, who had gathered to protest against foreign immigrants. 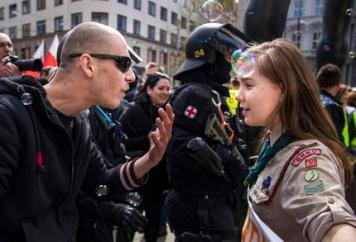 The grace I found is in the calm and repose  of this young lady as she looks into the threatening face of evil. Among other things, this young man yelled at her, “They will rape you!”

The sour note in this grace is a news report today states she is under police protection, apparently because of threats against her life. It seems her stance threatened some people.

Nonetheless, her words and actions point the way forward for us in our disputes, even if the daily struggle to take that higher road will be constant.