This is my sermon for last week. I love preaching from Genesis because it shows God involved in the nitty-gritty of life and does not avoid dealing with the flaws and sins of its protagonists. These particular verses also speak to my two small congregations because almost all us are over 60 and well-acquainted with disappointment.

Our faith can slip away from us at any age, but surely the challenges of aging are among the most daunting of threats.

This is especially so if we are forced to look hard at or to go through the experience of caring for someone ravaged by Alzheimer’s, some other form of dementia or by the many other physical or mental maladies that can arise.

At those times, caregivers, loved ones and, of course, those afflicted by the illness, can almost feel their spirits weaken and, at times, their faith ebb.

Before we look at these verses about the two old codgers Abraham and Sarah, we might first consider the life of one of the most unique seniors I have seen. 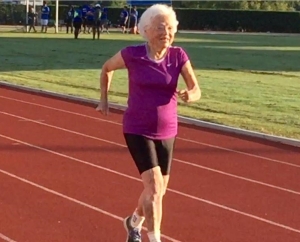 This week, the Washington Post told the story of Julia Hawkins, who lives down in Baton Rouge, La.

It begins by explaining that Ms. Hawkins is a specialist in running sprints and is in training for competition in the 50 meter dash.

And then it informs us that Ms. Hawkins is 101 years old, and that she just started running last year.

She runs the 50 meters in just over 19 seconds, which oddly enough is about the time it takes me to get from my recliner to the refrigerator.

But, friends, the story of Ms. Hawkins is one that tells us to never lose hope at any age over anything.

Unfortunately, most of us do.

Startle us, O God, with your truth and power and grant us the gift of your life-giving presence. As we hear your word read and proclaimed, we pray that you touch our hearts with your grace; strengthen our spirits with your love; and, deepen our faith with your word. We pray these things in the name of our Lord and Savior, Jesus Christ. Amen.

Abraham was 100 years old and Sarah nearly that old when the Lord visited them that day.

God was bringing them a message: they would be blessed with the birth of a child.

She might be happy if God gave us that news, but I would tell him, “Lord, no. Please no. Why are you punishing me? What have I done?”

But when Abraham and Sarah were at the age they should be moving into a nursing home and not buying a crib, God told them to get ready for a child.

Surprisingly, at least to me, they wanted a child.

We need to put God’s promise that day in perspective to appreciate what Abraham and Sarah felt at the birth announcement.

You see, God had promised a child to Abraham and Sarah well before that day.

As a matter-of-fact, God had first made the promise 25 years earlier.

Indeed, if you pull out your bible and read Genesis 17, right before our verses begin for today, God appeared to Abraham and made the promise again.

Let’s look at a little background to that day. At that time, and for the first 100 years of his life, the man we know as Abraham was named and called Abram.

But, in Chapter 17, God came to Abram and told him that his life was about to change.

First, he told Abram that he would have a new name, Abraham, which means “father of many nations.”

Second, God told the newly-named Abraham that his wife Sarai would also have a new name.

God said that Sarai would henceforth be known as Sarah, because she would be mother of many nations.

Third, God said, “And, Abraham, you need to get a baby room ready because Sarah will soon bear a son.”

When he heard that news, Abraham could not believe it.

He thought it was a knee-slapper of a joke.

Genesis 17:17 says that he fell facedown and started laughing.

God said, “Oh, it is going to happen and you need to name your son Isaac.” 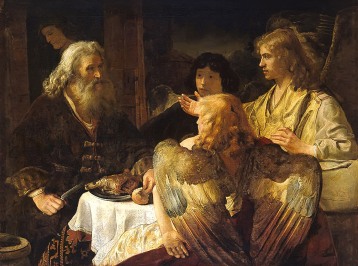 “Abraham and the Angels” Rembrandt, c. 1630 (Sarah is visible in the left foreground)

After a bit of time passed, a few days or weeks or months, the Bible is not clear, who should come pay the two old geezers a visit but the Lord and two unnamed men.

Abraham was thrilled to see them.

He was sitting at the entrance to his tent when the three appeared.

When he saw them, he ran over, greeted them, and asked them to rest under the tree while he got them some food and water.

They rested under the big oaks while Abraham ran to his tent and told Sarah to start whipping up some bread.

Then he went outside and ordered a servant to prepare a calf.

He returned to God and the two others with a feast.

The visitors chowed down.

It was then that one of the men told him, “I’ll be back next year and by then Sarah will have a son.”

Sarah was old, but not hard of hearing.

She was listening in to the conversation, kind of like a FBI wiretap except in person.

She heard the news of her having a son and she laughed and thought to herself, “After I am worn out and my husband old, will I now have this pleasure.”

I read that word “pleasure” in verse 12 and thought “Pleasure? You’re 99! You already have your share of aches and pains.

But, friends, you might know how she felt because maybe something like what happened to her has happened to you.

Have you ever wanted something your whole life and never gotten it?

Is there something you always wanted to do but never did?

Or was there something you yearned for and, as the years passed, it just seemed it would never be and finally your dream just went into the place where we stuff things we want to ignore.

Father’s Day is a bittersweet day for me.

The children who I talk about, they are not mine.

I love them and claim them as my own, but I never had any children.

She had wanted a child, but had never had one.

It was worse for Sarah, though, because back in those days, a woman was supposed to have children.

A woman’s worth was based on having children.

People believed that a woman without a child was . . . less.

Not quite as good.

Sarah carried that burden of shame with her for months and weeks and years and decades.

Oh, how she had wanted a child and especially a son, a son surely for Abraham, someone to carry on the family name and the family traditions.

Worse, she had been remembering God’s promises for 25 years.

You can imagine her praying, “When, God, when?” until she could pray no more and hope no more and finally tucked her dream and desire into that compartment in her mind.

So that day, when she heard the man talking about her having a child, she laughed.

There are different types of laughs.

There are belly laughs, that happen when something strikes you as hilarious and the laughter erupts and starts down your belly and flows out of you.

There are chuckles at small jokes or things that happen during the day.

There are giggles like small children might have when they have put one over on mom or dad.

I think Sarah’s laugh was more like a snort, a “no way, no how,” sarcastic kind of laugh.

And, with that snort, Sarah also showed her doubt about God.

When God heard that laugh, he turned to Abraham, apparently kind of surprised.

God said, “Why did she laugh? Is anything too wonderful for the Lord?”

Then he said, “I will return to you next year and she will have a son.”

Then, Sarah laughed, too.

Both had given up on God and doubted God and lost any hope that had that the promised would be fulfilled.

Who among us, at our age, has not felt crushing loss or devastating disappointment?

Like them, we wonder if God heard our prayers, or if he will answer them or maybe, it enough time has passed for us, we have given up and locked into that compartment.

So, we forget about it ever happening or ever receiving an answer.

In such cases, maybe a little chink is knocked off our faith.

But, Abraham and Sarah still had faith or at least kept some form of faith alive.

Clearly, they still believed in God and were surely in direct relationship that day.

You note that twice in these verses, Abraham called himself God’s “servant.”

Note, too, that God didn’t punish any doubt that they had.

You see, for Sarah and Abraham, the unbelievable happened.

Sarah had a child. God’s promise had come true.

The story of Abraham and Sarah is a story of two people, parents of us all, moving from hopelessness to hope and from hope to fulfillment.

But, there is something in these events for us.

Friends, however down or doubtful you may get about God, hold on to your faith and to your hope.

Understand, it is a mistake to base our faith in God upon fulfillment of our desires, dreams, wants or prayers.

Instead, we need to keep our faith in God open to the amazing and surprising grace of God, a grace that can come to us in the most unexpected of ways.

And, we need to keep remain aware of the daily graces of God that we that we take for granted.

Even the beating of your heart and the breathing of your lungs are signs of that grace, as are your food, shelter, clothing, health and the rising of the sun and breezes in the air.

Our faith in God’s grace, surprising and daily and constant, needs to wrap itself around our doubt and disappointments and say that it is okay and God is still with us.

And remember that our God is full of power and surprises.

God brought the Hebrews out of slavery in Egypt.

God broke the back of slavery here and when hate and prejudice persisted, ended the laws of segregation and separation and is calling is people to join him in showing the miracles of love in the midst of the hate that swirls around us.

God won’t do everything we ask and hope for.

But God will be God and God will do God’s will and what a wonderful, grace-filled will it is.

Even in the ups and downs and fears and regrets and disappointments and devastations of life.

Is anything to wonderful for God?

May we all hold on to that kind of faith.